Punjab captain Abdullah Ejaz won the toss and decide to field first while Federal Area’s posted competitive total of 192 for the loss of only three wickets in allotted in 20 Overs. Captain Jahanzaib Tiwana scored a brilliant half century 68 runs in 52 balls with the help of 9 fours and 2 sixex, Hamza Hameed made 66 in 52 balls with 5 fours and 3 sixes both added 130 runs for the third wicket partnership Adeel Khan scored 37 in 18 balls with 8 fours, Muhammad Haris took 1-24.

In reply Punjab Disabled Team were bowled out only for 19 runs in 15.2 overs, Umer Farooq was the top scorer with 28 in 23 balls with 4 fours, Wajid Alam and Waqas Ahmed made 12 runs equity. 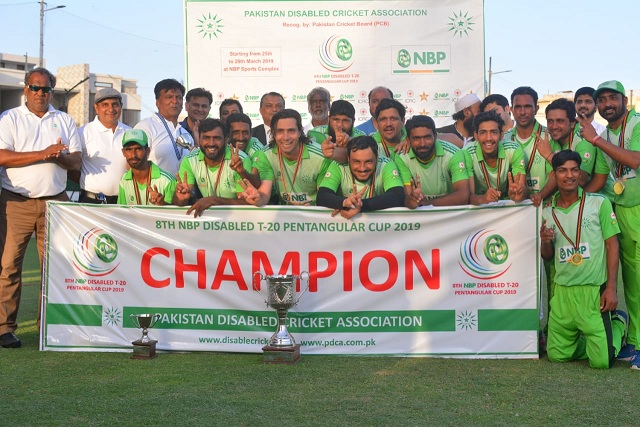 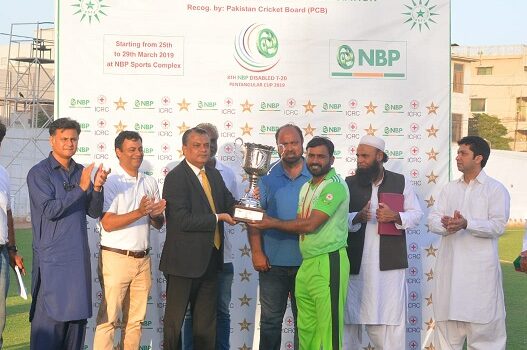 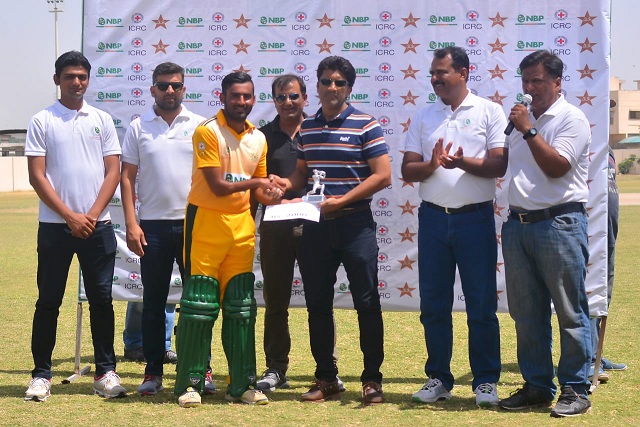 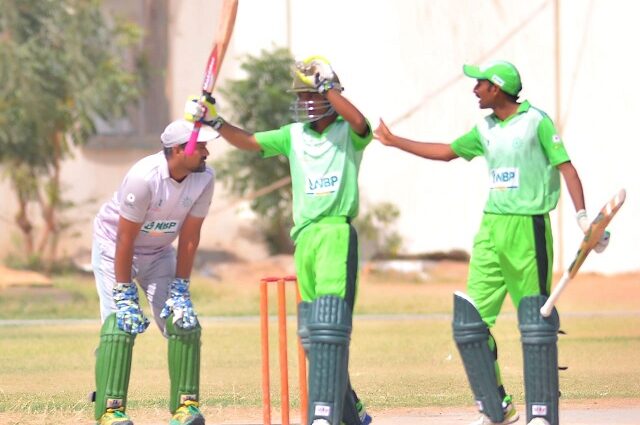 Karachi: Hamza Hameed Federal Area’s Batsman at Rashid Latif Cricket Academy in the last League match in the 8th NBP Disabled T-20 Pentangular Cup, is raising the bat after completing the stunning half century against Balochistan. He scored 95 runs in a match wining inning on Thursday.

In the 1st match Federal Area’s Captain Jahanzaib Tiwana won the toss and decided to bowl first, while Sindh was all-out only for 93 runs in allowed 20 overs. Captain Majid Hussain was the top scorer with 23 runs. Left arm spinner Muhammad Asif took 4-2.

In reply Federal Area’s reached the target 95 runs in 14.3 overs for the loss of 3 wickets. Saif Ullah Khan scored 32 in 25 balls with 2 fours and one six, Hamza Hameed 19, Muhammad Saqlain 15 and Adeel Khan 14 not out also batted well.

In other match Punjab Disabled Team Captain Abdullah Ejaz won the toss and chooses to bat first. Punjab team made 164-7 in 20 overs. Opener Muhammad Shabaz scored brilliant 90 runs in 43 balls with 7 fours and 8 huge sixes, Abdullah Ejaz scored 29 runs not out in 21 balls with two fours and one six. Off Spinner Haroon Rashid captured three wickets for 32 runs.

In reply Khyberpakhtoon Khwa easily reached the target 165-5 in 18.3 overs. Sajjad Khan made brilliant half century 55 in 25 balls with 8 fours and two sixes, Captain Nihar Alam played a responsible inning he scored 42 runs not out in 31 balls with one four, Abdul Jabbar made 34 runs in 38 balls with one four and one six. Left arm medium pacer Abdullah Ejaz took 3-39.

Former Pakistan Captain and President PDCA Rashid Latif send the Video Message he appreciated the efforts of all PDCA Officials specially to Petron in Chief Saleem Karim and Hon. Secretary Amir Uddin Ansari to organized a very successful event he also thanks the Sponsor National Bank of Pakistan, International Committee of the Red Cross (ICRC) and Pakistan Cricket Board (PCB) for excellence support as always. 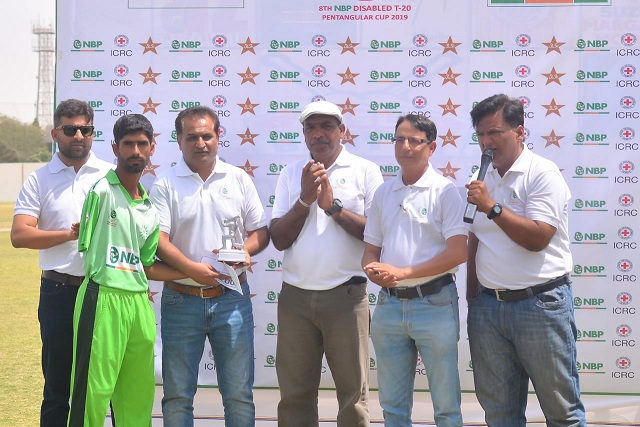 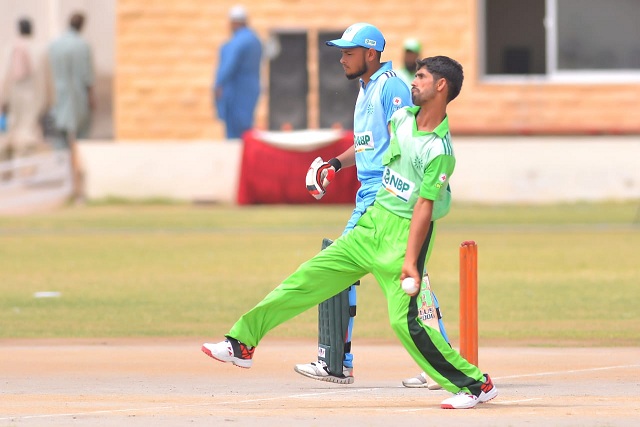 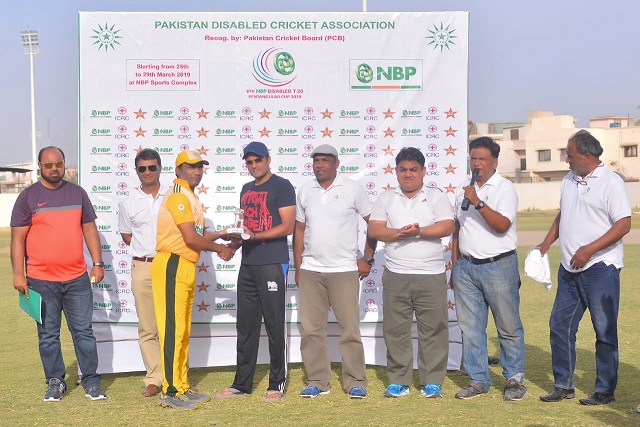 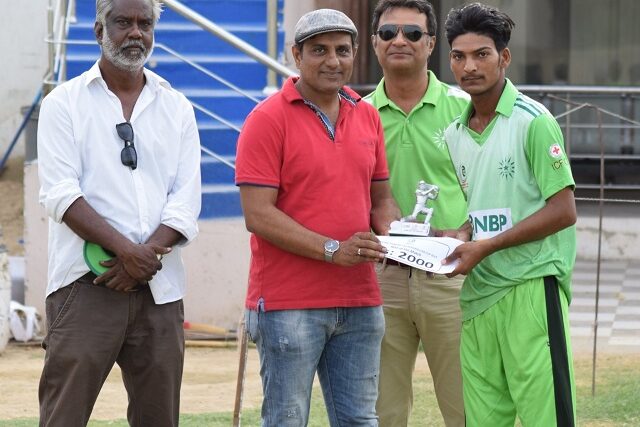 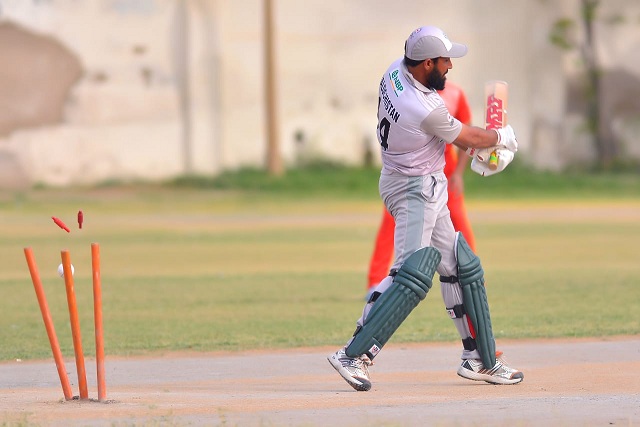 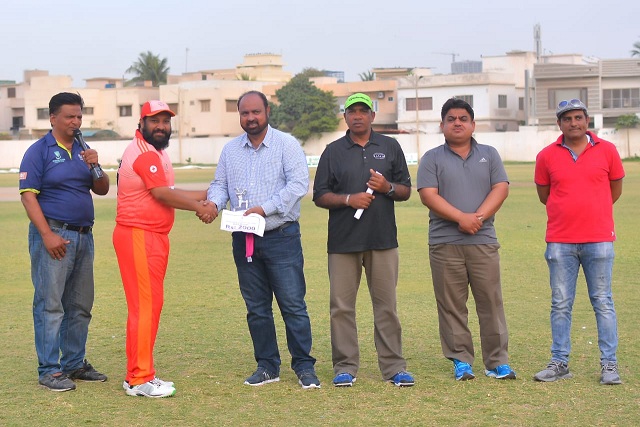 Chief Guest Iqbal Wahid appreciated to the efforts of the PDCA Officials to organized a successfully 8th NBP Disabled T-20 Pentangular Cup 2019 events in Karachi, he also brief about the Sponsorship and promise to more support in upcoming events, Hon. Secretary / Tournament Secretary PDCA Amir Uddin Ansari thanks to the National Bank of Pakistan and International Committee of the Red Cross (ICRC) to Sponsor the 8th NBP Disabled T-20 Pentangular Cup 2019, specially thanks to the Pakistan Cricket Board (PCB) for excellent support and guidance. First Class Umpire Rasheed Khan and Waseem Uddin were supervise the matches while Match Referee was Muhammad Javed and Official Scorer was Rashid Aslam. 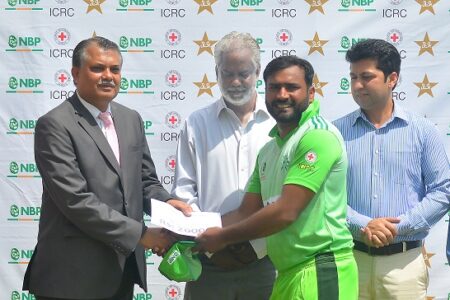 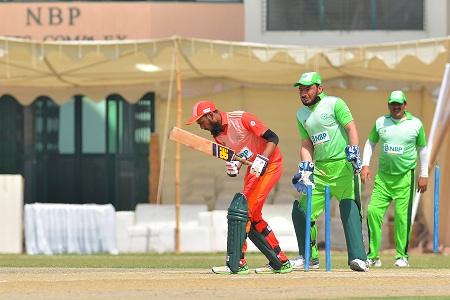 Karachi:- on the occasion of Inaugural Match of 8th NBP Disabled T-20 Pentangular Cup 2019 Ahmed Raza of Punjab was Bowled out from the hand of left arm spinner Gohar Ali at NBP Sports Complex here on Monday. 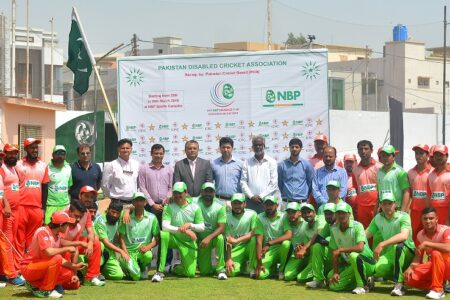 KARACHI: The Eight edition of NBP disabled twenty – 20 Pentangular Cup 2019 will starts from 25th march here at the NBP Sports complex Stadium on Monday, four provinces with federal areas teams including host Sindh, Punjab, KPK and Balochistan will participant in the event. The Media Manager PDCA Muhammad Nizam announced here on Saturday. RLCA gulburg and TMC ground will also host some matches during the competitions. The event is being sponsor by the National Bank of Pakistan while ICRC will be the Co-Sponsor and held under the auspices of Pakistan Disabled Cricket Association (PDCA) with the full support of Pakistan Cricket Board (PCB). The Hon’ secretary PDCA Amir Uddin Ansari, Head of Sports NBP Iqbal Qasim with others NBP officials will announced winners and runner-up cash award and other details soon in a Media conference at NBP Sports Complex Karachi.

KARACHI (Sports Reporter): The 8th edition of NBP Disabled T-20 Pentangular Cup 2017 will begin from Monday 25th March at National Bank Sports complex in Karachi at 01:30pm. This was announced by the tournament secretary and Honorary Secretary Pakistan Disabled Cricket Association (PDCA) Amir Uddin Ansari at a press conference held at the National Bank Sports Complex in Karachi. Head of CSR Division NBP Iqbal Wahid, Head of sports NBP& Former Test Cricketer Iqbal Qasim, Manager CSR NBP Asif Ahmed Khan, event manager Anwar Farooqi, former international cricketer Saeed Azad, Event Manager NBP Anwar Farooqui, Azmat Ullah PDCA Official Syed Rahat Ali Shah, Muhammad  Sadiq Khatri Media Manager Muhammad Nizam and others were present on the occasion. Amir Uddin Ansari said PDCA organized eight events and all sponsored by National Bank of Pakistan while  ICRC is the co-Sponsor and Pakistan Cricket Board (PCB) also supported PDCA. We are very thankful to the National Bank for their support from day one. We also thank Iqbal Wahid, Head of CSR Division National Bank of Pakistan for sponsoring the Tournament. All the matches of this event will be broadcast live on Pakistan disabled cricket association face book page. Amiruddin Ansari said that the main purpose of the tournament is the preparation of the upcoming World Series  which is scheduled  in England in August this year and the 4-member national selection committee of the PDCA, under Iqbal Imam and Sabih Azhar with Muhammad Javed and Javed Ashraf as members, will pick 30 for the camp after which the National disabled cricket team will be named for the World series. Former Pakistan captain and President PDCA Rashid Latif send the message from Islamabad and said the National Bank, Pakistan Cricket Board’ and ICRC have always been generous supporters of PDCA for the promotion of disabled cricket. He hoped the support will continue. Rashid Latif congratulated all selected players of five participating teams and hoped PDCA selectors will find talented  players from this event.  Iqbal Wahid in his speech lauded the efforts of PDCA in Disabled Cricket promotion at local and international levels. He said National Bank of Pakistan will sponsor more National and International Events for Disabled Cricket with PDCA. Head of Sports NBP Ex-Test Cricketer Iqbal Qasim said in his brief address that the National Bank of Pakistan had been working with PDCA from the very first day for the development of Disabled Cricket in Pakistan and the PDCA has done tremendous work for Disabled Cricket worldwide, Pakistan Cricket Board has also recognized the PDCA. The media manager Mohammad Nizam thanked all electronic and print media representatives for their support& cooperation with PDCA, media also played a major role in the promotion of disabled cricket. I again thank the National Bank, PCB and the ICRC for their cooperation. The Tournament will be played on the league basis with top two teams qualify for the final. The event is being held under the auspices of Pakistan Disabled Cricket Association and is being sponsored by National Bank of Pakistan. The Winner Team will Get cash Prize of Rs: 1,50,000= (One Lac fifty thousand ) with Trophy while the Runners-up Team will receive  Rs: 75,000/= (Seventy five Thousand) with Trophy. Man of the Match for each match will get Cash Prize Rs 2,000 rupees and Man of the final match will get 5,000. Best Batsman, Best Bowler, Best Fielder and Player of the Tournament will get Rs 5,000 each. On the Opening Day, first match, between Federal Areas and Punjab, will begin at 9:30 am. The second match at 01:30pm between Balochistan and Sindh. According to Tournament Secretary other league matches will be played at RLCA and TMC Cricket Ground while final will be held on 25th March at NBP Sports Complex at 10:am. PDCA, PCB and NBP Officials and others dignities will also attend the Opening Ceremony. Five Teams include four provinces and Federal Areas will feature in the Championship with Federal Areas  as defending champions. The Chief Selector PDCA Iqbal Imam (Karachi)  and Member Selection Committee Sabih Azhar (Rawalpindi), Javed Ashraf, (Lahore), M Jawaid (Karachi) announced the following squads.